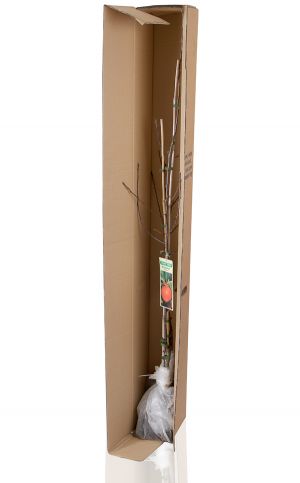 This is a typical example of our root wrapped trees that you will receive - note the fruit/ornamental trees we stock will vary in appearance according to species and season. Please be aware that the compost around the roots is there just to keep them moist and will fall away when unwrapped, leaving a bare-rooted plant. You can mix this compost with your soil when planting your tree.

"Plant did not arrive until I emailed - not very vigorous"

"I purchased two laburnum trees, one covered in black spots which died over about 3 days, the other had badly wilted leaves which even after planting continued to wilt until the tree died. A very gruff man on the phone asked me to send photos,which I did, but have heard nothing since. I later (foolishly) gave them a second chance and bought several fruit trees including a 'Czar' plum tree, which just wilted and died, although the others are fine. I haven't bothered to complain about it based on my previous experience, as I won't be buying anything else from them."

Other people looked at