The most important thing to remember is that pumps should not be switched on unless they are underwater. They are designed to be cooled and protected by the water, so running them dry will cause damage.

Why do some Water Features come without a plug?

We don't always supply a plug with a water feature, it depends on the product, style of feature, pump supplied and likely location that the product maybe installed. All of our products are designed for ease of installation there are however, a specific set of rules set out by the building regulations which must be adhered too: "Building Regulations - Part P" this is a government directive which states that any NEW PERMANENT household or garden electrical supply must be installed by a competent Part P Certified electrician. Some of our products wont require a permanent installation, its worth considering a number of things in order to ensure you safely install your feature or seek the help and advice of a qualified electrician. If in any doubt seek the advice of a Part P Certified electrician. Full details of Part P available here.

Some of our water features are self- contained, this means that everything you need is included. You just need to add water and connect to an ordinary household power socket. Some simple self-assembly may be required, such as connecting a tube to the pump.

The water feature below shows a 'dig a hole' in the ground reservoir.


Step 1
Measure size hole against the reservoir you are using.

Click to enlarge Step 2
Place the reservoir in the hole.

Click to enlarge Step 4
Attach the Pump to the bottom of the Water Feature.

Click to enlarge Step 5
Fill reservoir with water and place the reservoir lid on the top.

Click to enlarge Step 6
Attach the feature to the pump. 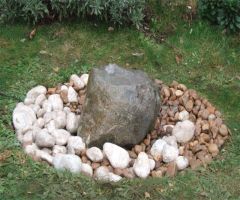 Bear in mind the practicality of power supply and maintenance as well as were best to view them.

Consider viewing the feature from inside the house: the use of simple outdoor spotlighting can make the feature even more impressive at night.

If you choose a position beneath a tree or over hanging shrubs, think of cleaning it. Trees can drip a sticky deposit, and all will drop leaves or needles.

The larger features may need two people to fit, but most can be installed by one person.

These are hung on the wall by a securely fixed screw or nail. The feature is then hooked into place by a picture hanger or an indent in feature itself. The pump is housed under the water and not usually visible. A small tube then feeds the water up behind the feature to cascade down again.

If the feature has a reservoir that requires sinking underground, then the ground can be marked out to the exact size using perhaps a stick, gravel or sand. Sit the reservoir in the hole and make sure it is level. If you have enough room sit the pump on a flat stone so that it is not on the bottom of the reservoir and so helping the pump stay clear.

None of our features need a water supply, just fill with water on installation, and the water circulates.

Most powered units come with a 10 metre electric cable without a plug, except solar powered features. Run the cable into an outdoor socket, or into a garage or shed. You can extend the cable if you need.

If you run the cable under ground, you should use armoured trunking to stop digging though it by accident. 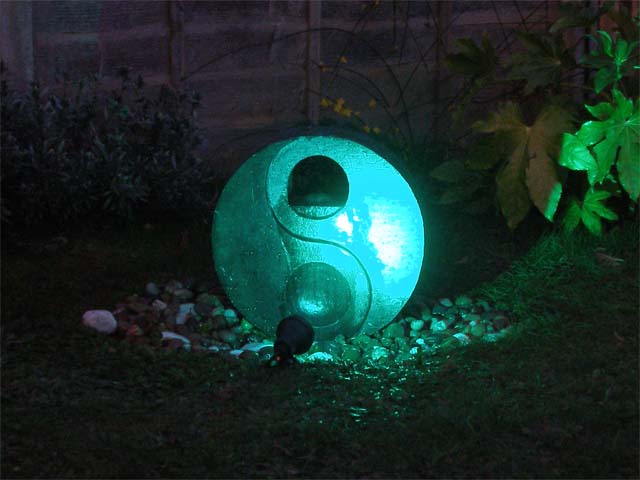 Solar powered features are self contained and work in direct sunlight. To install plug the solar panel into the pump and put it in a sunny position. Solar water features do not store energy - the water flows only during direct sunlight.

Use of lighting can make your water feature look stunning from dusk to dawn. One or two simple spotlights can highlight the feature so that you won't want to close your curtains.

Frost and freezing: will this affect my water feature?

The following is a guide to help you make an informed decision. Please contact us for more information if you need it.

When water freezes, it expands. This expansion is what causes frost damage. For example; outdoor pipes and taps often split because the water inside the copper pipe freezes. This forces the copper to expand beyond the limit of its flexibility, causing cracking. When the ambient temperature rises and the ice inside melts, the tap or pipe starts to leak. Insulation jackets are often purchased to protect outdoor pipes and taps from freezing.

To be confident, it is advisable to drain a water feature if there is any chance of water inside it freezing.
If there is a chance of surface damage, the feature should be brought inside or inside a garage, or covered to reduce the chances of freezing.