How to Grow Cucumbers in the UK 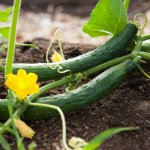 Cucumbers are a later-spring/summer favourite, with their crisp skin, cool insides and ubiquitous presence in salads. Growing your own is a worthy endeavour, but it's good to get some tips in before committing to the attempt.

Why not try to get growing with the kids? Not only might they learn something, but it might work a trick to get them to eat their vegetables!

If frost is still a possibility, don't start your cucumbers outside. Even if they're in a seed tray, you need to keep that indoors or in a greenhouse in a propagator so the seeds/early plants don't get too cold.

If you're well past the frost, the lid of a propagator is less necessary, but you'll still want a growhouse or similar so the cold nights don't get to be too much.

Plant your cucumber seeds one to a well, and put them a centimetre or two deep. Cover with more general-purpose compost, then water in. Keep a close eye on them over the next few weeks, and look for the second set of leaves, rather than just the first. Because of this, you'll want to use a seed tray with wells that are around 5cm/2in across.

Once your cucumber plants have reached the four-leaf stage, it's time to plant them out. Take note of what kind of cucumber you're expecting - if the packet picture is of a smooth cucumber, grow it in a greenhouse. If it's ridged, you can go for the veg patch.

For a greenhouse, keep them 1 to a pot or two or three to a grow bag. Cucumbers can take up a fair bit of space once they're grown, and you definitely want the most amount of space for the fruit to fill. Because of this, in the veg patch you should keep them at least 30cm apart.

Cucumbers like a good amount of water - that watery centre of the fruit has to come from somewhere! Try not to overwater them, as they can suffer from rot, but there's a little trick you can do to reduce watering.

Cut the bottom off a clear 2L bottle of pop - empty of course - and keep the cap. Place the bottle over your plant, and press it into the ground a bit. Voila - your own one-plant propagator! To water the plant inside, take off the cap and pour in, then put the lid back on to keep the moisture inside for longer than usual.

If it's looking a bit too wet, simply take off the lid again!

Cucumbers like to produce both flowers and fruit, but for you those flowers are a waste of plant energy. Nip off the male flowers once the female ones grow into fruit (they'll resemble a miniature cucumber growing). On indoor varieties, take the males off immediately.

You can use liquid feed once the flowers start forming to get even more bountiful crops.

Harvesting cucumbers couldn't be easier - just pull them off the plant when you're happy with the size. If it looks like they're turning (shrivelly and the rest), harvest them then cut the turned bit off. The rest is still edible!

Categories: Gardening, How To, Plants, Planting, Vegetables & Stuart Thomas
Posted By: Stuart Thomas
Search
Primrose TV
Follow us
Welcome to the Primrose Blog
You'll find all the tips, guides and inspiration you need to make your garden beautiful here and everything you'll need to make your vision a reality at Primrose.co.uk.
Categories
A garden is the greatest of human pleasures and the greatest refreshment of the spirits of man. – Francis Bacon
Archives
Wish List
Last Added Items
Go to Wish List
You have no items in your wish list.
© 2022 Meika Ltd. All rights reserved | Primrose is the trading name of Meika Ltd (Registration number: 04756556) | VAT number GB945691778